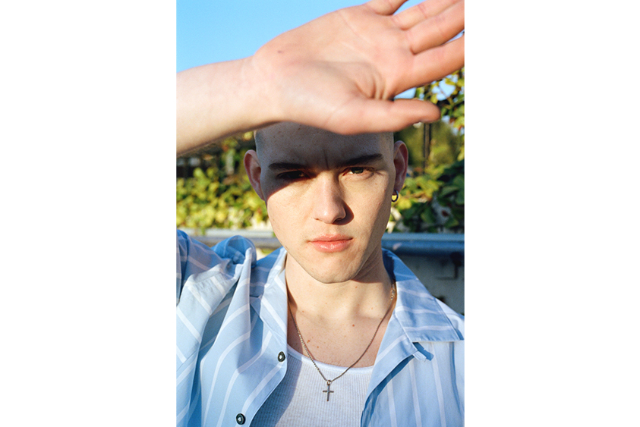 Artists are often shy about vocalizing their desire for success, but Trevor Daniel has long-since been speaking his stardom into existence. An outsider might perceive Daniel’s rise as an overnight catapult of stratospheric proportions, but the singer’s been quietly carving a career in music since his teens. From learning to produce beats in his bedroom to attracting hit-making heavyweights with his artful bridge of electro-R&B and balladic pop, Daniel created his own wave to ride to the top.“The fact I now get to make music everyday? That’s insane,” Daniel says of his newfound success. “I get to wake up and do this everyday. Sometimes I’ll have to come and sit there like, “Damn, we really did it.”
But industry mainstay-status isn’t the only thing the Houston-native has recently achieved. Almost a year after the release of his debut EP, Homesick, the 25-year-old reached number one on the US Viral 50 with the project’s first single “Falling” —a track that also saw him enter the Top 40 in over 20 othercountries. Daniel revealed that “it didn’t feel real” when he noticed the track begin to regain traction months after it’s release.“We recorded that song in two hours, the energy in the room was just so right. I didn’t see it coming, I never thought that would be the one.”Clearly, fans did. The singer’s ethereal vocals over a trap-infused downbeat already primed listeners for the repeat button, but it was Daniel’s lyrical prowess that sparked their imagination. “Falling”s sonic depiction of heartbreak is so relatable that millions selected the song to soundtrack their creations on popular content-sharing platform, Tik Tok, detailing relationship woes. Soon, pop sensation Blackbear was reaching out to remix the track.It’s all a far cry from his online tutorial roots. Drawing inspiration from idols, Kid Cudi and Kanye West, Daniels taught himself production basics from YouTube videos and began uploading his musical experimentation (“It was troll-y music, I was scared to look like I was trying,” shares Daniels of his early output). When Hurricane Harvey devastated the city, then 22-year-old Daniel was forced to evacuate his family home with just music equipment in tow —returning later to find the house flooded in chest-deep water. Within a week of the calamity, he had quit his day job at a men’s suits store, newly determined to pursue music full-time.“Harvey made me really realize I wanted to do this,” shares the young artist. Without even knowing how serious the storm was going to be I had thought, Let me grab my music stuff just in case,” Daniels remembers. “It felt like a sign. The fact that I grabbed it subconsciously relieved me so much. I thought, as long as I can make music, I’m straight.”Daniels is now hard at work on his first full-length offering, recruiting top-tier talents (read: Travis Barker) to lend their expertise. Setting a standard of unwavering positivity in every session, Daniels claims he and his collaborators are manifesting the impending album’s impact. This attitude, Daniels believes, has also contributed to the global embrace of his breakout single.“The music I’m making right now, is the best I’ve ever made. We say all the time, “Yeah this is about to be the biggest albumin the world, it’s going to define a generation. And then ‘Falling’ starts blowing up, when I hadn’t been following that song popping off for a year. I’m 100 percent confident the album is going to blow up.”But will he be prepared when it does?“Absolutely. I’m ready to go, I’m going to make everything happen. I’m ready to jump.”